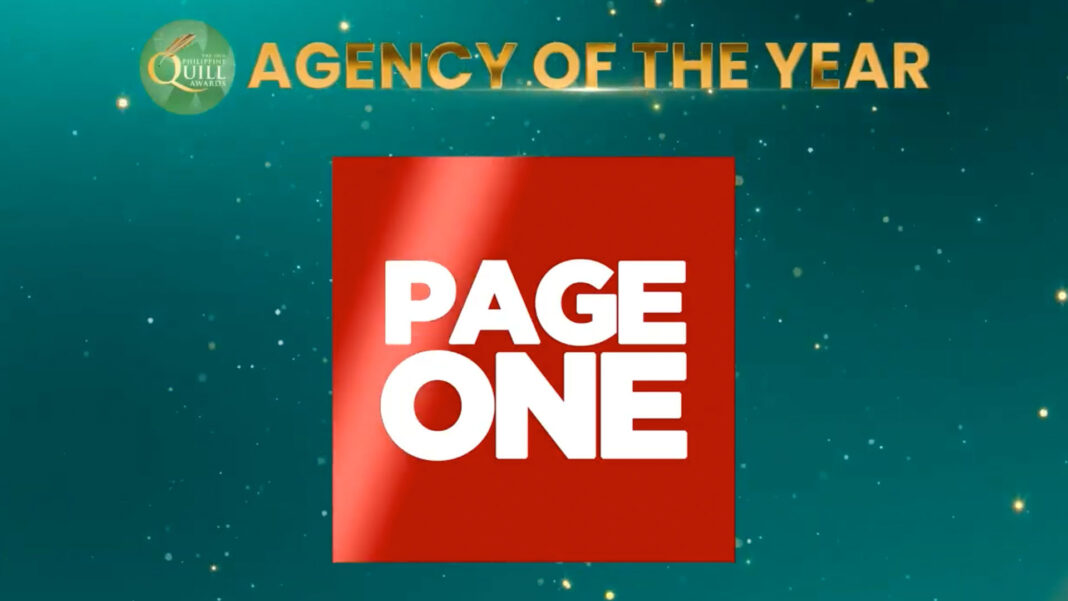 PAGEONE Group wins its first-ever Agency of the Year (AOY) nod at the 18th Philippine Quill Awards of the International Association of Business Communicators (IABC)–Philippines.

The AOY distinction recognizes the agency that has garnered the highest number of winning entries in the competition year. PAGEONE Group and its clients received 14 Awards of Merit and 11 Awards of Excellence in various categories.

These entries comprised original PR, advocacy and online campaigns of the agency as well as campaigns of a number of its clients, such as Energy Development Corporation, Phoenix Petroleum, Department of Transportation and SM Foundation.

“We are extremely grateful and highly elated to receive this top award for the first time from one of the most esteemed PR and communications award-giving bodies in the country,” stated PAGEONE Group CEO Ron F. Jabal, APR.

“We dedicate this historic win to our hardworking team members, as well as to our valued clients and partners who have placed immense trust and confidence in our ideas and capabilities. This recognition also reflects the strategic expansion of the Group to business communication, branding, advertising, and marketing services,” he added.

The Philippine Quills AOY plum is the latest in a record-setting industry awards season for PAGEONE Group. The group was also cited AOY for an unprecedented fifth consecutive time at the recently concluded 56th Anvil Awards of the Public Relations Society of the Philippines (PRSP).

To cap its 2020 haul, the PAGEONE Group and its clients have also received international awards from the Gold Standards Awards by Public Affairs Asia, SABRE Awards by PRovoke Media, and the Asia Pacific Stevie Awards. The Agency CEO was recognized in Beijing China as “People of the Year” which is the “Communicator of the Year” recognition in the Golden Flag Awards.

In 2019, the PAGEONE Group was one of the agencies recognized as ASEAN Agency of the Year in Kuching, Malaysia. To date, PAGEONE has already won more than 200 awards in Singapore, Vietnam, Japan, Hong Kong, Canada and the Philippines.

Beginning two years ago, the Group has been expanding its international reach by servicing clients in Thailand, Saudi Arabia, Brunei, and Papua New Guinea. It has also increased its client base by securing major projects funded by international organizations and multilateral financial institutions.